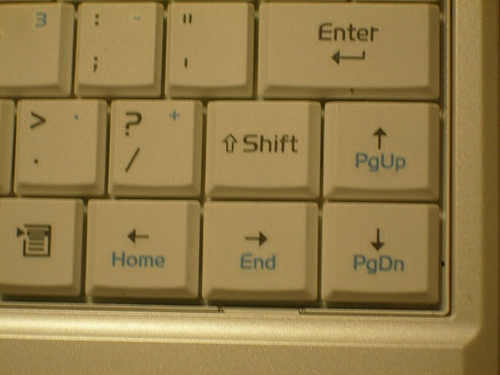 One of the things difficult to adjust with on the Asus Eee PC is the location of the right shift key. Sure, the keyboard is small, but pretty soon an Eee user would be able to adjust to the size. But the location of the shift key might prove to be difficult because the up arrow is wedged in between the ? key and the right shift key, whereas in regular keyboards, the shift is right next to the ? key.

Most of the time this would result in mistyping because you would accidentally hit the up arrow instead of the shift key, and your typed characters would suddenly be in a higher line (or another text field, altogether). Believe me, I’ve messed up a handful of documents and blog post drafts this way.

Eeeuser has a solution, which involves remapping the keys such that the shift and up buttons are swapped. This would also swap the down button with the right button. This way the arrow keys would be in a reverse-L position (reminiscent of old Toshiba notebooks).

This way you’re less prone to hitting the up arrow accidentally while typing. Then again, your navigating experience might be adversely affected (up, down, left, right).

It’s a tradeoff, and it depends which is more important to you, or if you can easily adjust to having the up arrow wedged in between.

Oh, and Eeeuser even suggests that you can swap the keys themselves! It’s possible and doable (done here!) but I advise you to be careful.

If you are computer fanatic then you must aware of famous the ASUS Eee PC. This award winning PC is known for its simplicity yet … END_OF_DOCUMENT_TOKEN_TO_BE_REPLACED

Netbooks, particularly the Eee PC (duh), are great. You can take them everywhere, they're relatively fast, and they're good enough … END_OF_DOCUMENT_TOKEN_TO_BE_REPLACED

GigaOM has posted a great article detailing 10 ways to trick out your netbooks for the best performance possible. I've been … END_OF_DOCUMENT_TOKEN_TO_BE_REPLACED