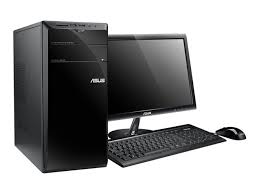 It is a fact that many computer users would like to have the advantage of less bulk and yet are not inclined towards a laptop or a notebook for that matter. The answer to this of course is a more compact desktop such as the ASUS Essentio Series. It is now being offered with Windows 8 64-bit edition.

The primary advantage of the ASUS Essentio Series, particularly it’s Mini Desktop PC is its lightweight form that is provided without any reduced functionality which most loyal desktop users have learned to love.  In fact, it is able to provide superior performance compared to earlier models of desktop computers. PC gaming and online gaming are very much a part of this model thus making it a work horse and an entertainment source in one package.

Computer users will be happy to note that this desktop is friendly to the environment with low power consumption and freedom from noise pollution. It likewise offers quality sound through high theatre audio. Not to be forgotten is the high speed internet connectivity.

What does all these prove? It simply proves that consumers have the advantage of choice regardless of what preference they may have in computer use. By expanding its product line to include quality choices in different forms, ASUS has made its newfound popularity useful to more people. There is no single market that can take advantage of its products since it has provided critical option to a wide range of computer users.

The regular Essentio Series can be a user’s personal entertainment center, a multimedia PC or just a means to simplify everything.  The mini Desktop PC provides maximized space saving with its slim and sleek design that does not compromise quality. The Essentio Series can be the equivalent of computer essentials.

If you are computer fanatic then you must aware of famous the ASUS Eee PC. This award winning PC is known for its simplicity yet … END_OF_DOCUMENT_TOKEN_TO_BE_REPLACED

Netbooks, particularly the Eee PC (duh), are great. You can take them everywhere, they're relatively fast, and they're good enough … END_OF_DOCUMENT_TOKEN_TO_BE_REPLACED

GigaOM has posted a great article detailing 10 ways to trick out your netbooks for the best performance possible. I've been … END_OF_DOCUMENT_TOKEN_TO_BE_REPLACED