Test Freaks recently was able to replace the built-in SSD on the Asus Eee PC 901, benchmark it. 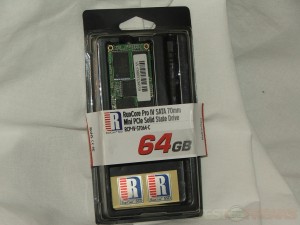 Now, installing it (on the 901 at least) is a breeze, because you can just use the built-in screwdriver to open your 901’s guts and remove the current 4GB SSD. Putting it back in would be the easiest thing in the world I would presume. Well, according to Test Freaks, it’ll just take two screws, and then we’re ready to go.

But why upgrade the SSD in the first place? 4GB obviously isn’t enough to do anything. I practically do most everything on my Eee 701, and dealing with 4GB is a pain in the neck. 64 gigabytes gives you more leeway with space. And apparently, the stock SSD is sluggish.

According to Test Freaks,

The SSD that comes with the EEEPC is slow as molasses, even running the ASUS Linux operating system. For whatever reason automatic update is turned on and when you power up the EEEPC it will start to download updates even if you don’t need them, and even if they aren’t for that particular model of EEEPC. There’s also really no way to delete the updates either, at least not an easy way. So when all of this happens the system bogs down to the point that you’re waiting upwards of 30 seconds sometimes for the system to respond because there’s just no more room on the SSD.

And after installation of the SSD, you can go and put XP on your Eee 901. And benchmarks will prove that you can turn your Eee PC into an actual workhorse. Now if only the SSDs of Eee 701s are screwed-in as well as opposed to soldered. Meh.

If you are computer fanatic then you must aware of famous the ASUS Eee PC. This award winning PC is known for its simplicity yet … END_OF_DOCUMENT_TOKEN_TO_BE_REPLACED

Netbooks, particularly the Eee PC (duh), are great. You can take them everywhere, they're relatively fast, and they're good enough … END_OF_DOCUMENT_TOKEN_TO_BE_REPLACED

GigaOM has posted a great article detailing 10 ways to trick out your netbooks for the best performance possible. I've been … END_OF_DOCUMENT_TOKEN_TO_BE_REPLACED