Macbook air wannabees are probably a dime a dozen. Everytime I visit a computer shop, there seems to be another Macbook air knock-off that promises to be the thinnest and lightest computer I’ll ever use. Okay, then, good for you guys. But they’re all running Windows, so you know, it’s kind of a dealbreaker. I mean, if you’re going for a Macbook air clone, then you just have to go for the full experience, right? 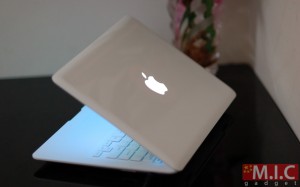 This Chinese computer manufacturer created yet another Macbook air knockoff that not only inherits the original’s good looks, but it also has almost-identical packaging! M.C. Gadget says that the box is indistinguishable from the ones produced in Cupertino. Also, the packaging is really convincing. If it wasn’t made from plastic – instead of aluminum, like the original – it may even fool a lot of people.

Thing is that Macbook air knock-off still runs Windows. I guess skinning XP, running Windows 7 (especially with the large icons on the Superbar, which I love so much) or installing one of the many dock applications can fool some people at a distance. But if you really want to go for the ultimate Mac OS X experience, you better hackintosh your Macbook air knockoff.

One guy purchased one in the Philippines for around $400. Once he got it home, he turned it into a more real Macbook. He installed OS X Snow Leopard on the device. The WiFi card wouldn’t work, so it was replaced with a compatible model. Also the touch pad doesn’t work quite as it should on a real Macbook.

If you”re not convinced, you can check out the video below:

If you are computer fanatic then you must aware of famous the ASUS Eee PC. This award winning PC is known for its simplicity yet … END_OF_DOCUMENT_TOKEN_TO_BE_REPLACED

Netbooks, particularly the Eee PC (duh), are great. You can take them everywhere, they're relatively fast, and they're good enough … END_OF_DOCUMENT_TOKEN_TO_BE_REPLACED

GigaOM has posted a great article detailing 10 ways to trick out your netbooks for the best performance possible. I've been … END_OF_DOCUMENT_TOKEN_TO_BE_REPLACED