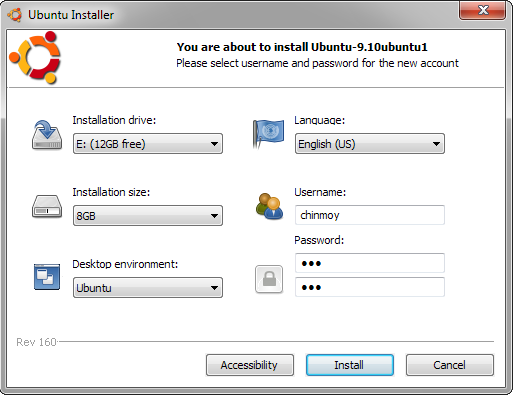 I’m pretty sure there are lots of you who are pretty curious as to what really is the big deal with Linux, and there may be a few Linux virgins among you guys who are willing to run it on your machines. However, I’m willing to bet that most of you guys aren’t that tech-savvy and that you would’ve wanted to install it on your Asus Eee PCs, but the thing is, the instructions regarding creating a Live CD, mounting the .ISO file, and partitioning the hard drive might be a little overwhelming for newbies. If you’re really into installing Ubuntu (or any other Linux flavor for that matter) you might solder on and be successful if you have the time to do so, but if you’re to scared to even give it a try, theres this little trick you can use to save you time and effort.

Ubuntu has long been using this installer called Wubi to help ease Windows users into running Ubuntu on their computers. It’s an .EXE file that grabs the Ubuntu .ISO from their servers, or if you’ve already downloaded it, from your hard drive. And it’ll go about installing Ubuntu like it was an ordinary Windows application. The next time you reboot your computer, you’ll be able to choose if you want to go to your crusty old Windows installation or if you want to go to your shiny new Ubuntu partition. And if you get tired of it, heck, you can uninstall it just like any other program!

A few caveats however: since this isn’t really a true Ubuntu installation on a separate partition, your Ubuntu experience might be as slow as molasses. But it’s going to be a great way to try out Ubuntu without making changes to your hard drive.

If you are computer fanatic then you must aware of famous the ASUS Eee PC. This award winning PC is known for its simplicity yet … END_OF_DOCUMENT_TOKEN_TO_BE_REPLACED

Netbooks, particularly the Eee PC (duh), are great. You can take them everywhere, they're relatively fast, and they're good enough … END_OF_DOCUMENT_TOKEN_TO_BE_REPLACED

GigaOM has posted a great article detailing 10 ways to trick out your netbooks for the best performance possible. I've been … END_OF_DOCUMENT_TOKEN_TO_BE_REPLACED