Running Windows 7 on your Eee PC and confused at all the changes Microsoft put in the operating system? Yeah, I know the last operating system you used was Windows XP (and you actually tried out that Linux sorcery for a couple of days, but you couldn’t figure out what the heck a “terminal” meant) and you don’t like all this fancy eye candy Bill Gates put into your computer. You’d want your computer to be less confusing, thank you very much. 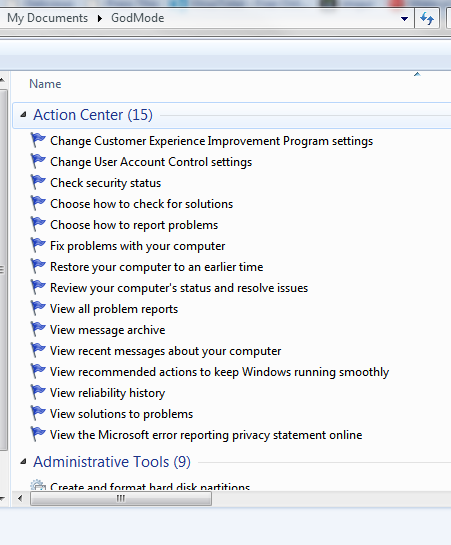 Maybe this might interest you then. It’s a little secret for Windows 7 users, called “GodMode” it’s basically a folder where all system configuration shortcuts are contained. Yes, it even beats Control Panel, believe it or not. It’s a bit overwhelming to figure out, and I’m using it now on my Windows 7 machine and I don’t understand half of what’s in that folder. But I like having one easy shortcut to control EVERYTHING on my computer. I don’t like hunting for solutions or Googling where to change this obscure setting when it’s all, you know, in one big easy to find shortcut on my Documents folder.

Apparently, “GodMode” isn’t anything new though. It’s been around since Windows 95, and searching for tips.txt on Windows 95 will show you that particular trick. Microsoft has a support article here.

I don’t really mind though. I like GodMode and I’m using it a lot. Happy tweaking, Windows 7 owners!

If you are computer fanatic then you must aware of famous the ASUS Eee PC. This award winning PC is known for its simplicity yet … END_OF_DOCUMENT_TOKEN_TO_BE_REPLACED

Netbooks, particularly the Eee PC (duh), are great. You can take them everywhere, they're relatively fast, and they're good enough … END_OF_DOCUMENT_TOKEN_TO_BE_REPLACED

GigaOM has posted a great article detailing 10 ways to trick out your netbooks for the best performance possible. I've been … END_OF_DOCUMENT_TOKEN_TO_BE_REPLACED