The Eee is indeed among the hottest gadgets this Christmas shopping season. But what about other alternatives (Eees are sold out in many places, after all). Here’s one: the Everex Cloudbook. According to Ubergizmo, it could make for good competition to the Eee. 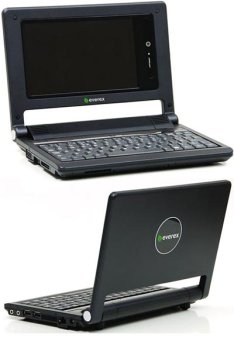 This Linux-powered UMPC touts to follow the Eee PC in many aspects, featuring a 7″ display, a 1.3 megapixel webcam, wired and wireless Ethernet connectivity, a 4-in-1 memory card reader, 512MB RAM, USB 2.0 and DVI-out. It ditches the Eee PC’s solid state drive and 900MHz Celeron processor in favor of a 30GB hard drive and a 1.2GHz Via C7 ULV processor. The Everex Cloudbook is tipped to ship this January 15th, retailing for $400.

I’m sticking with my Eee. The use of a non-SSD hard drive would probably make the device heavier than the Eee (unless it’s a microdrive similar to those used by iPods). Still, the spinning disc would probably cause battery life to be a bit shorter, and would be more prone to damage from shocks and bumps (an uncommon occurrence for devices this portable).

And the unusual touchpad placement (top of the keyboard) is a bit unintuitive in terms of user interface and usability. That is at least, in my opinion.

If you are computer fanatic then you must aware of famous the ASUS Eee PC. This award winning PC is known for its simplicity yet … END_OF_DOCUMENT_TOKEN_TO_BE_REPLACED

Netbooks, particularly the Eee PC (duh), are great. You can take them everywhere, they're relatively fast, and they're good enough … END_OF_DOCUMENT_TOKEN_TO_BE_REPLACED

GigaOM has posted a great article detailing 10 ways to trick out your netbooks for the best performance possible. I've been … END_OF_DOCUMENT_TOKEN_TO_BE_REPLACED