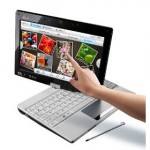 One of the things that had me excited about netbooks when they first came out is that this is a chance to actually put SSDs into the mainstream. And then netbooks boomed. But… they seem to have left SSDs in the dust.

Okay, SSDs may be the future (no moving parts? Practically no defrags needed? Quick write times?), but it’s not quite ready for prime time just yet. For starters, it’s expensive. And for the price you’re paying, how many gigabytes are you going to get? 4? 8? 16? It’s something not worth it at the moment, if you ask me. This is why most netbooks after the first Eee PCs came out with hard drives instead.

Which brings us to the new Eee PC model being offered by Asus.

Asus have revealed that their new Eee PC T91MT multi-touch netbook will feature the 32GB pSSD Gen2 drive from SanDisk. Asus chose this model from SanDisk’s offerings as it suits the netbooks low power needs and small form factor requirements.

If I remember correctly, this is the first Eee PC in a long time that has been offering an SSD. And if you’re wondering what else is new with the Eee PC T91MT, it comes bundled with Windows 7 Home Premium and supports touch gestures on its 8.9-inch screen such as rotating, pinching and swiping, let alone the fact that it can also be used as a tablet PC!

For those who were disappointed by the death of the the Crunchpad, it looks like we might actually have a serious contender to replace the its (non-existent) throne.

If you are computer fanatic then you must aware of famous the ASUS Eee PC. This award winning PC is known for its simplicity yet … END_OF_DOCUMENT_TOKEN_TO_BE_REPLACED

Netbooks, particularly the Eee PC (duh), are great. You can take them everywhere, they're relatively fast, and they're good enough … END_OF_DOCUMENT_TOKEN_TO_BE_REPLACED

GigaOM has posted a great article detailing 10 ways to trick out your netbooks for the best performance possible. I've been … END_OF_DOCUMENT_TOKEN_TO_BE_REPLACED