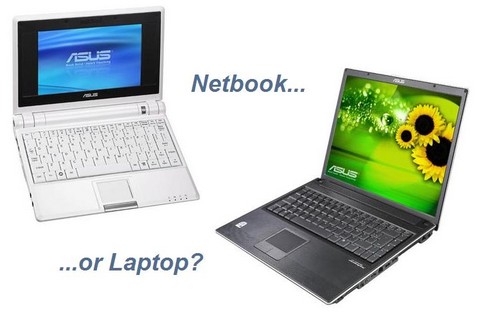 If you’re willing to sacrifice a bit of computing power for portability, I’m pretty sure you’re looking at netbooks like the Asus Eee PC as a replacement for your aging laptop. Now I’m wondering if you were able to get the netbook, or if you went ahead and got the full-featured laptop instead. You see, according to a survey by PriceGrabber.com, 55% of consumers think netbooks complements traditional laptops rather than replacing them.

It’s not particularly surprising that most people would rather use a full time laptop for some or many tasks than one that was designed to be low cost and ultraportable. What’s a bit more surprising to me is the implication that 45% of consumers do think that netbooks are replacements for traditional laptops — indicating that many people just don’t need a big screen or a powerful processor to meet most of their computing needs.

The PriceGrabber study defined netbooks as machines with screens smaller than 11 inches and price tags lower than $500, which seems about right to me.

The survey also points out something that’s been pretty clear for the last year or two: The increasing demand for cheap netbooks has led to a drop in the overall prices for computers. PriceGrabber.com reports that the average cost of a laptop in its directory dropped from $808 in December 2008 to $645 in December, 2009.

What do you guys think? Did you replace your laptop with a netbook or did you purchase a netbook so you can be even more portable?

If you are computer fanatic then you must aware of famous the ASUS Eee PC. This award winning PC is known for its simplicity yet … END_OF_DOCUMENT_TOKEN_TO_BE_REPLACED

Netbooks, particularly the Eee PC (duh), are great. You can take them everywhere, they're relatively fast, and they're good enough … END_OF_DOCUMENT_TOKEN_TO_BE_REPLACED

GigaOM has posted a great article detailing 10 ways to trick out your netbooks for the best performance possible. I've been … END_OF_DOCUMENT_TOKEN_TO_BE_REPLACED