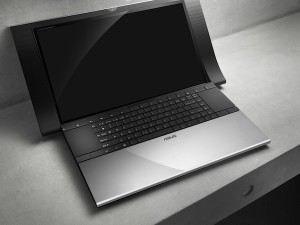 This next laptop I’ll be featuring is by no means an Asus Eee PC – in fact it’s over at the extreme opposite of the spectrum – but this is so great I’d feature it anyway. Asus has been known for a while for making rock-solid motherboards, and recently their netbooks have given the Taiwanese manufacturer a name in notebooks. But as solid their notebooks are, they’re not exactly a household name yet. I’m guessing it’s because their notebooks are a bit lacking in the design department. But then those days are probably over.

Asus has been working with Bang & Olufsen to produce sleek, undeniably high-end notebooks, and the Asus NX90Jq is the result. Set to be unveiled at the 2010 Consumer Electronics Show, the Asus NX90Jq is one sleek laptop. This laptop is exactly how it looks like: it’s an aluminum-encased monster power horse. It’s got dual touchpads that can be used like a DJ’s turntable, and it has a monster 18.4-inch display. On the side we can find the B&O ICEpower speakers to give you audio way superior than most laptops.

Under the hood, you can find that the ASUS NX90Jq is just as pretty: it’s rocking a Core i7 processor, NVIDIA GeForce GT 334M graphics, and it can support up to 1280GB of storage – with dual drives- a slot-in Blu-ray drive and USB 3.0.

I’m guessing this laptop will be very, very costly. Heck, I can imagine Apple’s offerings will be coming out cheap compared to this. People are complaining that B&O products are overpriced. I say I don’t care, it’s sexy enough to warrant a huge price tag.

If you are computer fanatic then you must aware of famous the ASUS Eee PC. This award winning PC is known for its simplicity yet … END_OF_DOCUMENT_TOKEN_TO_BE_REPLACED

Netbooks, particularly the Eee PC (duh), are great. You can take them everywhere, they're relatively fast, and they're good enough … END_OF_DOCUMENT_TOKEN_TO_BE_REPLACED

GigaOM has posted a great article detailing 10 ways to trick out your netbooks for the best performance possible. I've been … END_OF_DOCUMENT_TOKEN_TO_BE_REPLACED