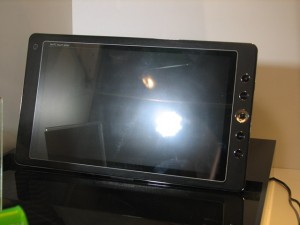 I’m guessing Asus is starting to emulate the hype machine techniques of a certain computer company in Cupertino, because they’ve just released a mysterious announcement of a certain killer product that’ll be launched this June. And aside from hints of the aforementioned “killer product,” they haven’t said anything else about it. Way to build up a mystery, Asus. It’s working.

Of course, we all know that Asus’s only products so far that can be considered as killer would be the much-awaited Asus e-book readers and the Eee PC Touch. Everyone is saying that one of those tablet computers will be the product that Asus is referring to. It makes sense, really, especially after Apple is making a lot of headway with their iPad. Right now, rumors are pointing to the Asus tablet to have a sub-$500 price, which is a big deal, really.

Now, here’s the big question: will making a better iPad push Asus into much bigger territory like the way the Eee PC suddenly turned Asus into a major notebook/netbook manufacturer? Remember, before the Eee PC came out Asus was primarily known for its motherboards and nothing else, even if they’ve been making some really great computers even then.

Would Asus survive going head-on with Apple? Would you consider buying an Asus tablet over the iPad? Tell me about it.

If you are computer fanatic then you must aware of famous the ASUS Eee PC. This award winning PC is known for its simplicity yet … END_OF_DOCUMENT_TOKEN_TO_BE_REPLACED

Netbooks, particularly the Eee PC (duh), are great. You can take them everywhere, they're relatively fast, and they're good enough … END_OF_DOCUMENT_TOKEN_TO_BE_REPLACED

GigaOM has posted a great article detailing 10 ways to trick out your netbooks for the best performance possible. I've been … END_OF_DOCUMENT_TOKEN_TO_BE_REPLACED