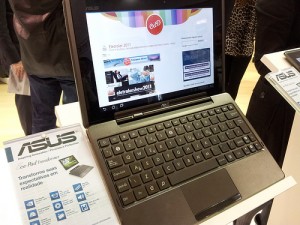 ASUS’ unique tablet and PC hybrid, the ASUS EEE Pad Transformer, created a lot of interest when it was first announced. And now it is getting a lot of good reviews for its unique take on mobile computing.

The ASUS EEE Pad Transformer got a lot of interest when it was first announced. Here’s a product that bridges the gap between the internet tablet and a netbook. The EEE Pad Transformer sports two unique and separate parts, which are sold as a bundle or separately. The first part, which is the brains of the whole device, is the tablet part. It comes equipped with a Tegra 250 chip and runs on Android 3.0, or Honeycomb. People who have bought the Transformer tablet report great, zippy performance thanks to its processor chip. The screen is no slouch either, as it generates HD resolutions of 1280×800.

The general consensus among users is that the ASUS EEE Pad Transformer works perfectly for what it is designed for – light computing and as a cross between a tablet and netbook experience. The processor is zippy enough to do the most common tasks associated with a tablet or a netbook – general computing and light gaming. It also allows the users to experience having a tablet and then have the option to work more efficiently with the attached keyboard, because, really, typing on a screen can be quite hard.

If you are computer fanatic then you must aware of famous the ASUS Eee PC. This award winning PC is known for its simplicity yet … END_OF_DOCUMENT_TOKEN_TO_BE_REPLACED

Netbooks, particularly the Eee PC (duh), are great. You can take them everywhere, they're relatively fast, and they're good enough … END_OF_DOCUMENT_TOKEN_TO_BE_REPLACED

GigaOM has posted a great article detailing 10 ways to trick out your netbooks for the best performance possible. I've been … END_OF_DOCUMENT_TOKEN_TO_BE_REPLACED