Those lucky guys from Engadget were able to get their hands on a bunch of new Asus Eee PCs, and they’ve posted their thoughts on these new netbooks. 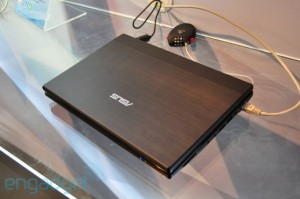 The Asus Eee PC 1018P and 1016P are netbooks made out of an aluminum casing, and obviously, they would feel better than the old plastic Eee PCs Asus has released over the last few years.

The overall build quality feels great, and with the flush battery they are both seriously slim and light. We wish ASUS had equipped the systems with metal keyboards to match the expanded aluminum touchpads, but the plastic keys felt plenty sturdy under our fingers. As for specs, the placards claim that they will have the new Intel N470 processors (and some peculiar N455 and N475 CPU choices), 2GB of RAM and 10 hours of battery life. We’re still trying to figure out the difference between the two models, but our guess is that the 1016P will have 3G, while the 1018P sticks just to WiFi.

The 1015PE, 1015P and 1001PQ models, however are made of plastic and they look like they are the latest additions to Asus’s Eee PC Seashell line. But they might be released under a new series called Diary. From Engadget:

The 1016PE’s faux dark wood lid has a more professional look, and its shape reminds us somewhat of HP’s Mini 5102. On the other hand, the 1015P has a white, softer-looking matte lid and an updated touchpad with integrated mouse buttons. Inside it appears they will be available with Intel’s Pine Trail Atom N450 and N470 processors, and apparently the forthcoming N455 and N475 CPUs. Last but not least, ASUS also seemed to whip out the race car-inspired, kid-intended 1001PQ that has the same specs as the 1005PE

I’m pretty excited to see these new Asus Eee models. What about you?

If you are computer fanatic then you must aware of famous the ASUS Eee PC. This award winning PC is known for its simplicity yet … END_OF_DOCUMENT_TOKEN_TO_BE_REPLACED

Netbooks, particularly the Eee PC (duh), are great. You can take them everywhere, they're relatively fast, and they're good enough … END_OF_DOCUMENT_TOKEN_TO_BE_REPLACED

GigaOM has posted a great article detailing 10 ways to trick out your netbooks for the best performance possible. I've been … END_OF_DOCUMENT_TOKEN_TO_BE_REPLACED