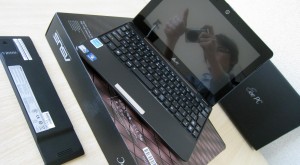 Netbooked.net was able to get their hands on an Eee PC 1008-KR Karim Rashid Edition, and they’ve published a pretty in-depth review. They say that it feels more solid than other Eee PCs – in fact they’re saying that it’s a step up from the other netbooks produced by Asus. It’s not as thin as light as you might expect, but it’s still better than most netbooks. The beefier specs aren’t so bad too.

However, the netbook has a few shortcomings, mainly the 4-hour battery life (one battery) and the $500 price tag.

Getting one with Windows 7 Home Premium is definitely a good deal, although I wish they could’ve sold one with Linux preinstalled or with no OS at all. heck, we’d like a cheaper Asus Eee PC. What do you think?

If you are computer fanatic then you must aware of famous the ASUS Eee PC. This award winning PC is known for its simplicity yet … END_OF_DOCUMENT_TOKEN_TO_BE_REPLACED

Netbooks, particularly the Eee PC (duh), are great. You can take them everywhere, they're relatively fast, and they're good enough … END_OF_DOCUMENT_TOKEN_TO_BE_REPLACED

GigaOM has posted a great article detailing 10 ways to trick out your netbooks for the best performance possible. I've been … END_OF_DOCUMENT_TOKEN_TO_BE_REPLACED