We’ve all heard about the Asus Eee Box EB1501 before, but now there’s an unboxing video floating all around the net. You see, I’ve been looking for a great desktop computer that can replace my battered 7 year old machine, and it looks like the Eee Box EB1501 is a good contender. It’s got pretty good specs, and to top it off, it’s relatively cheap. 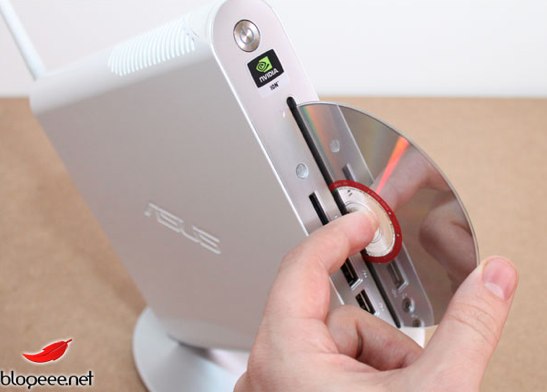 In case you don’t remember, the Asus Eee Box EB1501 is a tiny desktop computer that sports a dual core Atom 330 processor, NVIDIA ION graphics and a slot-loading disc drive. The specs of this nettop are: 2GB of RAM, a 250GB hard drive, 6 USB ports, HDMI, eSATA, and S/PDIF ports. The disc drive is a DVD burner. There are versions of the Asus Eee Box EB1501 that actually has a Bluray drive in place of the DVD drive. I’d like to get my hands on one of those.

With that fancy disc drive, NVIDIA Ion under the hood, and considerable aesthetic improvements, the Eee Box EB1501 has seemingly little to do with the Asus Eee Box of yore. So, is it as stunning in person as it is on paper? The folks at Blogeee.net have unwrapped the thing and stood it on its fancy metal stand, and they seem to be digging it — of course, their impressions are written in French, so we can never be entirely sure. Now if only Asus could work in an internal Blu-ray drive we’d be set!

Now you can watch the unboxing video below:

If you are computer fanatic then you must aware of famous the ASUS Eee PC. This award winning PC is known for its simplicity yet … END_OF_DOCUMENT_TOKEN_TO_BE_REPLACED

Netbooks, particularly the Eee PC (duh), are great. You can take them everywhere, they're relatively fast, and they're good enough … END_OF_DOCUMENT_TOKEN_TO_BE_REPLACED

GigaOM has posted a great article detailing 10 ways to trick out your netbooks for the best performance possible. I've been … END_OF_DOCUMENT_TOKEN_TO_BE_REPLACED